Is Removing Charge-offs From Your Credit Report Possible?

Yes (In Some Cases): Who You Should Contact First & General Tips

Home » Debt Help » Charge Offs: What They Are & How to Remove 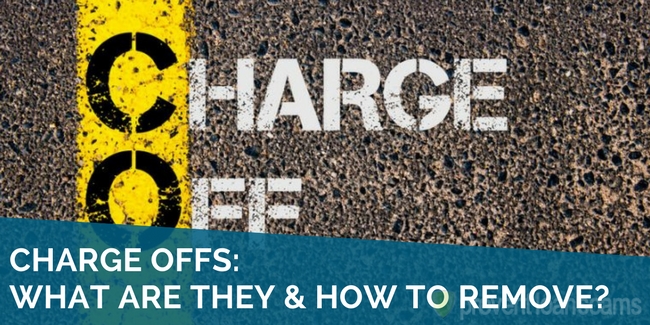 A charge-off on your credit report can be tricky business. How do you approach the creditor or collection agency? Is it impossible to remove a charge off from your report?

We’ll offer some ideas on the first question. And yes, it’s possible to remove a charge-off from your report. However, you’ll need to meet a few criteria.

While in college, Joe K. signed up for two credit cards with $1,000 credit limits. Before he graduated, he’d maxed out the cards, and was unable to pay the balances.

Suzie Q. bought a car with an auto loan when she landed her first job. A year after being hired, the company went out of business, leaving her jobless and unable to continue to pay her car payment. Other bills continued to stack up.

Bob and Kelly B. bought their first home in 2005, and were elated to finally have a piece of the American dream. In 2008, they both lost their jobs and were unable to pay their mortgages. Like Suzie Q., they couldn’t pay their other bills, including medical expenses not covered by health insurance.

In each of the above scenarios, the results of each consumer’s financial woes were a slew of delinquent payments that led to charge-offs. These charge-offs were listed on their credit reports, making it difficult (if not impossible) for the consumer to secure future financing of any type.

Do you have charge-offs or negative items on your credit report, and want them removed? Our research of the top credit repair companies can help.

What Should You Do?

You may have found yourself in any one, or a combination, of the above scenarios. If you haven’t, you should thank your lucky stars. Improving your credit following a charge-off can be challenging, to the say the least.

If you have accounts that have been charged off, don’t be anxious. There are steps you can take to dig yourself out of the hole.

Here, we’ll go over charge-offs, what leads to them landing on your credit report, and how you can remove them. We’ll also note the illegitimate schemes with which agencies often snare consumers who are desperate to have charge-offs removed.

So, roll up your sleeves, and get ready to learn some of the basics about charge-offs and their effects on your credit.

What Leads to Charge-offs?

Americans are still recovering from the 2008 financial collapse, which left them without jobs and unable to cover their debts. Add to that those who were struggling with debt problems before the crisis, as well as those who went into debt well after it, U.S. consumers are carrying more than $13 trillion of debt.

According to NerdWallet, the largest chunk of this debt comes from mortgages, which amounts to $8.35 trillion. The rest of the debt is as follows:

Left unpaid, any of these debts can lead to charge-offs. For many, the domino effect of not paying these debts have left their credit in shambles.

It may have started off as one missed payment, then two. Before many know it, their continued delinquencies have led to their creditors giving up hope that they would ever pay off their balances.

A charged off debt is typically one that is at least 180 days overdue. After that span of time, the company cannot reasonably expect to collect payment on the debt. So, the debt is ‘charged off’ on the company’s balance sheet.

After the creditor charges off the account, it heads to a collection agency (like AFNI Collections), where the situation grows to be even more of a headache. Constant phone calls at your home and/or office are par for the course when delinquent accounts hit a debt collector’s desk.

Note: bills from creditors that don’t report to credit bureaus on a monthly basis won’t hurt your credit score until the debt is turned over to a collection agency.

It’s not too late…

1. If you find yourself in a situation in which you can’t pay your debts in a timely manner, be proactive. That means contacting the creditor immediately, not after you fall behind.

The creditor may be able to restructure your loan, or adjust your payment arrangement.

2. If that doesn’t work, and you still end up with a charged off account, contact the collection agency. Your chances of working out a payment arrangement increase.

Collection agencies are generally more willing to settle the account for an amount that is less than the amount owed.

Before you make that call, gird your loins and swallow your pride. This is not the time to be defensive or argumentative.

3. Some observers advise you contact the original creditor to start negotiating the removal of the charge-off. The purpose is to persuade the creditor to remove the charge-off in exchange for your proposed payment.

Other observers note that once the account is in collections, you’ll have to negotiate with the collection agency, not the original creditor.

4. Understand that if the account is paid, it won’t disappear from your credit report. The debt still appears on your report, but the account is reported as “settled” or “paid as agreed” rather than as “charged off.”

Understanding the ramifications of missed payments

As we’ve said, failing to pay your bills on time can wreak havoc on your credit. According to FICO data, one missed payment could cause a 780-credit score to plunge 90 to 110 points.

This analogy applies to consumers who have never missed a payment on any credit account.

Understand that the Fair Credit Reporting Act provides that collection accounts can only stay on your credit report for seven years.

Start taking the steps we’ve noted to have charge-offs removed as quickly as possible.

3 thoughts on “Charge Offs: What They Are & How to Remove”