Differences Between the Statute of Limitations & Reporting Period 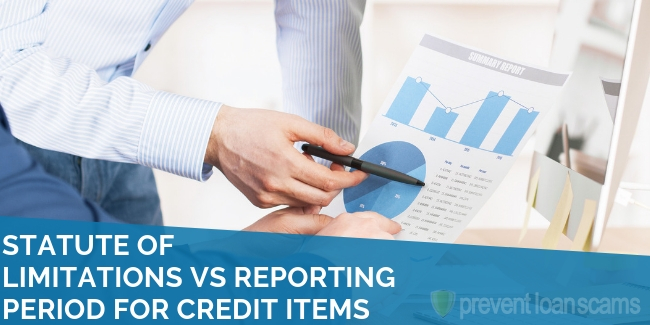 If you’re struggling with some damaged credit and working to rehabilitate your financial life, one of the most important things you need to understand is the critical relationship between the statute of limitations vs reporting period for credit items.

Whether you’ve run into some payment problems or have completely defaulted on some debts, knowing the critical difference between these two items can make all the difference in understanding what to pay and when.


We researched & reviewed the best credit repair services. They can help you dispute inaccurate items on your report & work towards improving your credit score.

The Statute of Limitations – What it Means

If you steal an orange from a farm stand at the age of 10, the farm stand owner shouldn’t be able to sue you for the cost of that orange when you’re 30, right?

Regardless of the fact that you’ve probably learned a thing or two and would like to repay the farmer for your silly antics, the law would agree that you shouldn’t be legally compelled to repay the man. This is the statute of limitations.

Here’s what that means in the debt context. Companies only have so long to collect your debt before you are no longer legally responsible for it.

This does not mean that you can buy things and not pay for them. We’ll set that aside. What it means is that if you have a debt that surpasses the limitation, debt collectors are no longer legally able to pursue you to collect.

The statute limitations on credit items has a few key factors that are critical to keep in mind.

First, it varies from state to state. For example, that statute of limitations in one state may be five years. In another state, it may be as long as 20.

Before you even respond to a debt collector, make sure you understand how long the statute is in the state in question. That could be either the state in which you live or where the loan was originated.

Second, the statute of limitations for debts varies greatly based upon the type of debt in question. For example, promissory notes have some of the longest statutes of limitations.

This is because these debts tend to be tied to a long-term asset. They also tend to be very high dollar amounts.

Some examples include mortgages or student loans. These are loans that have high dollar amounts. Therefore, more time is given for collectors to try to recoup funds.

Finally, the statute of limitations law is definitive, but only if you don’t claim the debt. For example, if you live in a state where the statute is five years and on the final day of the fifth year, you decide to make a payment, you’ve just reset that five-year clock.

By making the payment, you’ve validated the debt as legitimate. Unscrupulous debt collectors will often trick consumers into making a payment. Be extraordinarily wary.

The credit reporting period for a loan only states how long the record will remain on your credit report. Simply put, your debt may still be valid under your state’s statute of limitations but may have fallen off of your credit report, which generally happens after about seven years.

It’s important to note that if you make a payment on that debt, they could list it as brand new credit and it could reappear on your report.

Debt collectors are after one thing: collecting debts. They will not often take the time to determine if a consumer actually owes the debt. They may not determine if the statute of limitations has already passed, either.

In fact, they’re more likely to keep attempting to collect the debt. That is because, once in a while, they can get a consumer to reopen the debt in question. The consumer would do that by making a payment or confirming ownership.

So what can you do? First, ensure you understand your rights. Debt collectors must, by law, follow strict guidelines of how and when they contact you (see: the FDCPA).

If you receive a phone call, do not under any circumstances say that you are aware of the debt or acknowledge that it belongs to you. Keep a record of your conversation and be straightforward.

There are a variety of templates available. But the main gist is to state that the statute of limitations has expired. State that you will be sending a letter to that effect. The collector should stop contacting you.

Additionally, you can ask them to verify and validate the debt. That requires the collector to produce a whole host of documents proving that the debt is legitimate and owed by you. More often than not, if the debt is older and they can’t provide documentation of the debt, they’ll give up.

The statute of limitations is a critical tool for consumers to be aware of. Moreover, understanding how and when items can appear on your credit report will help you plan for your financial future as you begin to improve your credit.