What to Do When You Receive a Call or Letter from CPS?

Including Info About the Company & Its Debt Collection Practices

Home » Debt Help » How to Deal With Cavalry Portfolio Services 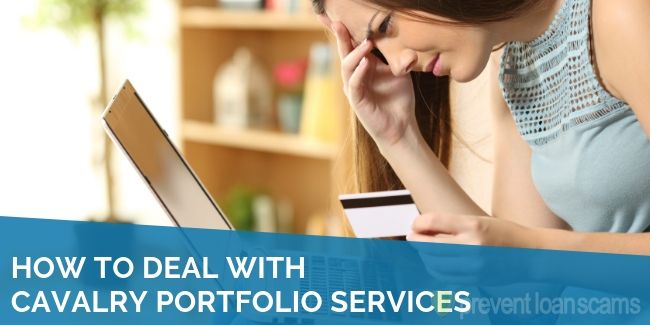 Everyone falls on hard times and some of us have fallen into debt. It’s not a unique story: lots of people have trouble paying bills and end up in hock to debt collectors.

If you’ve fallen behind and haven’t or didn’t work with the financial institution in the first place, you may find that you are no longer dealing with them, but rather, with a debt collection agency.

How did this company get your information? Why do you owe them money and not the former lender? How do you deal with it?

Let’s take a look at all of these things and especially, how to deal with Cavalry Portfolio Services (CPS), one of the largest debt buyers in the country.

That’s right. There are companies out there whose sole job is to buy debt and attempt to collect it. How do they do this? Let’s look at an example.

John Smith has a job and is doing well for himself. He owns a car and a home and has a moderately decent credit score. Unfortunately, he slips and falls on his front steps and ends up in the emergency room.

He’s on the mend and returns to work, but comes home one day to find a bill from the hospital for $1,000. Apparently, he hadn’t yet met his deductible for the year, so he owes the hospital money. He forgets about it and doesn’t pay. Subsequent letters end up in the trash can.

About three months later, he receives a rather threatening call from CPS saying that he owns them $1,000 and that he needs to pay ASAP.

How did this happen? In short, the hospital sold the debt. Lenders, very often, are not expert debt collectors. They provide a service, like medical care, vehicles, or consumer products like electronics. They likely do not, however, collect stale debt.

Even if they only get a small fraction of what they are owed, it’s still better for them than going through the trouble of attempting to collect the debt from you directly. They want to let someone else deal with it!

So How do I Deal with CPS?

Whatever you do, do not pay the debt collector right away and do not say anything that would suggest you will. Mistakes have been known to happen and debt collectors deal with so many different accounts and amounts each day that it isn’t ridiculous to think they have your name incorrect.

The best way to deal with CPS or any debt collector, for that matter, is ask them to prove that you actually owe the debt in question. CPS and other collectors will often buy debt information from companies in the form of spreadsheets with names, addresses, phone numbers and account balances. This is hardly a fail-safe way to do business.

In fact, CPS knows this and they are counting on most consumers to simply pay the bill. You shouldn’t do that. Instead, ask them to verify the debt.

There are a variety of different form letters online (including one here) that you can send to CPS or another debt collector asking them to confirm that you actually owe the debt in question and they have the authority to collect it.

The Consumer Financial Protection Bureau is a good resource. CPS may not be able to prove that you owe the debt at all. If they can’t, must forgo collection.

If they can, or they end up suing you, it’s important that you answer any summons that come your way. Ignoring a court summons can lead to a default in CPS’ favor.

Fortunately, the burden of proof is on CPS, not you. They have to be able to show an accurate and complete trail of the debt, that they have the right to sue you, the amount you owed in the first place, and the amount you owe now.

Hopefully, however, it won’t come to lawsuits. Generally, a debt buyer will either be very confident in their ability to show that you owe the debt or they will not and will give up.

The last thing that a financial institution wants to do is lose money. Selling your debt to a collector means they are losing money.

It is in both of your interests to work out a way for you to pay back the whole amount that you owe, directly to the company. When you’re having a tough time paying your bills, the first call should be to your creditors. They will be able to set up payment plans and help you get back on your feet.